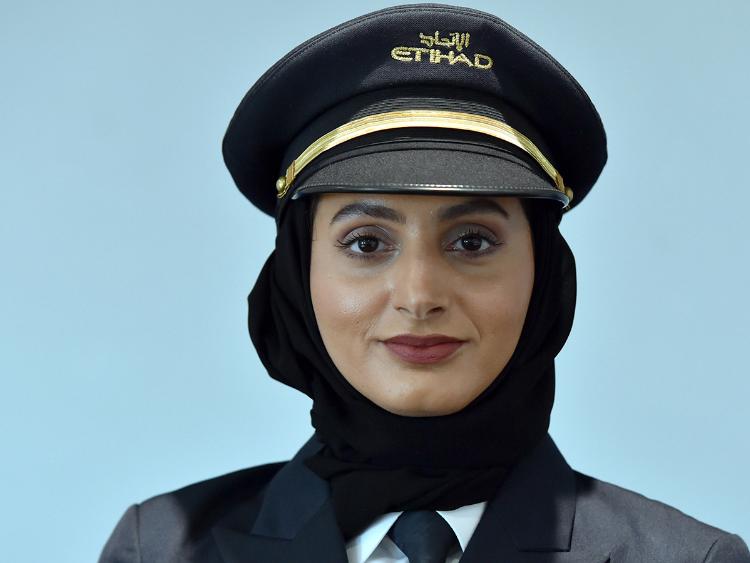 Meet the Emirati female pilot who flies A380s, one of the world’s largest passenger aircraft

Regularly flying across the world, traversing different time zones and flying the world’s largest passenger aircraft — the Airbus A380 — is all in a day’s work for Emirati pilot Aisha Al Mansouri, a senior first officer with Etihad Airways.

It all started when her sister, who was already a pilot, took her to an air show in Al Ain.

“While visiting the event there were some people working there who told me that a national cadet programme was opening at Etihad, so I looked into the programme and decided to join, and within eight months I was hired.”

Her first flight on the job was on an Airbus A320 to Ammam, Jordan.

“I had already done so much flight training — including flying a Cessna 172 — but once I was in the cockpit it was a very different feeling.”

Women can be whatever they want to be, that’s what I think my example shows. All women should follow a career path that inspires and makes them happy

She flew the A320 for five years before eventually moving up to bigger aircraft like the A330 and, the biggest of all, the A380.

“I currently fly medium to long haul flights on the A380, so it’s to destinations like Sydney, New York City, Paris and London,” said the pilot of nine years. “When I started with the A380 I was in awe of its size. I trained beforehand in a simulator, but once you see the aircraft up close for yourself you realise the size of it — it’s like flying a small building.

“Flying the A380 is amazing, it’s a huge plane, but it handles like an A320, it reacts very well and is really enjoyable to fly.”

Describing her job as more of a lifestyle than work, she added: “One of the unique things about being a pilot is that it is more than just a job, as a pilot you need to manage your lifestyle accordingly to be able to handle all of the long haul flights and the different time zones that come with it.

“The thing I try to concentrate on before I have long flights is to make sure that I am well rested, that’s the most important thing for me. The night flights are usually the tricky ones, for example if I have to fly at 3am I have to basically sleep during the day or afternoon.”

Stringent regulations mean pilots must rest a minimum of 24 hours before flights.

Flying the A380 is amazing, it’s a huge plane, but it handles like an A320, it reacts very well and is really enjoyable to fly.

“Other than making sure I am well rested, everything else I do is to maintain a positive health style, this involves eating right and working out.”

As for the flights themselves, Al Mansouri says her favourite is the manual take offs and landings.

“It doesn’t matter which destination I am flying to, the most enjoyable part is flying the aircraft. My favourite moments are during take off and landing. Having all the high-end technology is great for things like navigation and troubleshooting, but when it comes to the take offs and landings, I like to have a hands-on manual approach.”

And what exactly does Al Mansouri do during those long flight hours? Unlike passengers, pilots don’t have the luxury of television sets to keep them entertained.

“The manufacturers and companies make very good checklists for us to be doing during the flight, so we’re not just sitting there doing nothing,” she said. “We are doing constant checks on things like fuel, time, navigation and also just checking that all the instruments are functioning correctly. As you fly more regularly you get used to the long hours as well, at first I thought it would be really difficult, but it’s really normal for me now.”

Socialising with the co-pilot, she said, was another good way of passing the time.

“One of the good things is that we are a very multi-cultured airline and so we talk about each other’s countries and our cultures, and so it’s a very enlightening to learn about your work colleague.”

And as for long haul flights, Al Mansouri said that pilots are allowed to get some sleep.

Commenting on her role as a female senior officer, Al Mansouri said she is happy to be a positive example for other women and young girls.

“Women can be whatever they want to be, that’s what I think my example shows. All women should follow a career path that inspires and makes them happy.

“Within the UAE all fields are accessible as long as you really want it, and so if there is a woman out there who believes she is capable of being a pilot and has the necessary skill-set, then go for it.”

Working as a flight attendant

Alina Galat, from the Ukraine, who works with Etihad Airways as a stewardess said that her passion for travelling the world is what attracted her to the role.

“I always wanted to travel and see the world, when I first moved to the UAE I started working for a hotel and became a flight attendant later on when my friend advised me to go and join a training programme that was open. I loved the training and I was lucky enough to get the job. It’s been an amazing experience for me so far, I’ve been a flight attendant for three and a half years now and I still enjoy everyday.”

Galat says the job does have its many challenges despite the glamour that comes with travelling.

“It requires a lot of work. For long haul flights we are usually busy for most of the flight looking after the passengers and so I don’t really feel the long hours of work until the flight is over and I am off the plane. It’s important to look after your body to be able to do this job properly.

“Constantly travelling into different times zones is also another big challenge and so your sleep patterns are always changing. To do this job successfully you need to have a really big passion for it,” she added.

Keeping passengers happy is another big challenge according to Galat, who recalls some of the strange requests she’s been given during flights.

“There was a passenger who didn’t like the brightness of the on-board television screen and so the passenger requested if I could move the screen a little bit to the left side. I kindly told the passenger I wouldn’t be able to do that as I wasn’t an engineer.

“The difficulty is when some passengers don’t understand that I can’t do everything for them, they see us in uniform and think that we can solve every problem, we are obviously trying our best, but there are some things that are beyond our control,” she added.

“As a flight attendant I think it’s also important to be understanding of passengers as well, they might be going through an issue so we need to listen to them and not be rude, it’s always good to be kind and to have a positive attitude,” she said.