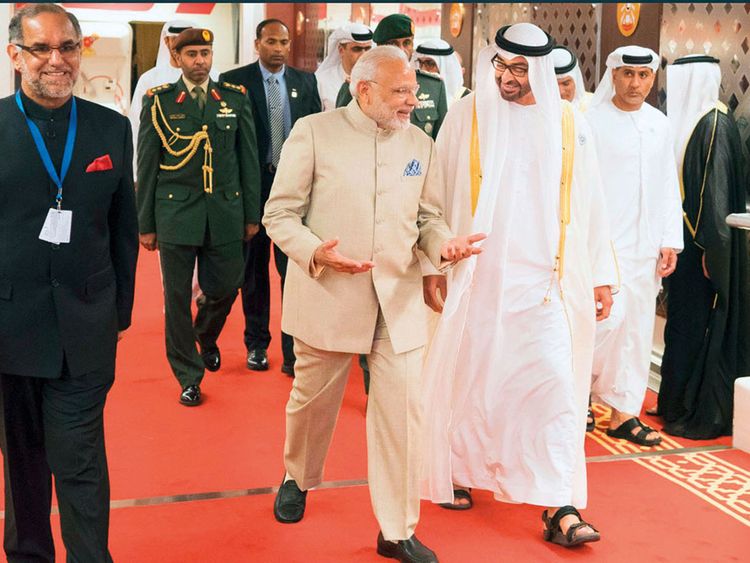 The bilateral ties between India and the UAE are not only enduring but also prolific and primed for more growth. Having prospered for several decades, it has more recently advanced into a sterling partnership spanning multiple strategies, with both countries firmly committed to expanding collaboration in new sectors.

Since the beginning of this year, several new points have been notched up on what is already a very notable bilateral relationship. In March, the late Sushma Swaraj serving as India’s Minister for External Affairs was invited by Shaikh Abdullah Bin Zayed Al Nahyan, UAE Minister of Foreign Affairs and International Cooperation, to participate as Guest of Honour in the 46th session of the Council of Foreign Ministers of the Organisation of Islamic Cooperation (OIC) in Abu Dhabi.

In August, Nasdaq Dubai invited Navdeep Suri, India’s Ambassador to the UAE, to usher in India’s Independence Day by ringing the market-opening bell. Nasdaq Dubai’s statement said the ceremony reflected “the rapid growth of close financial and economic ties between the UAE and India”.

Prime Minister Modi is also scheduled to receive the Order of Zayed, the highest civil decoration of the UAE, in recognition of his role in strengthening Indo-Emirati relations.

Several other events highlight this soft power collaboration. In March, the UAE Ministry of Culture and Knowledge Development opened the Zayed-Gandhi Digital Exhibition in the UAE capital to mark Mahatma Gandhi’s 150th birth anniversary. Organised in collaboration with New Delhi’s Mahatma Gandhi Digital Museum, the unique exhibition celebrates the values and legacies of Shaikh Zayed, founding father of the UAE, and Mahatma Gandhi, the father of Indian independence.

In April, Indian priests chanted Vedic verses during a two-hour foundation stone ceremony for the first Hindu temple in Abu Dhabi. The same month, India was Guest of Honour at the 29th edition of the Abu Dhabi International Book Fair.

Far be it that this friendship draws on shared interests in art, aesthetics, tourism or tradition alone. Anchored on historic trade relations, the two countries have made steady progress in boosting and bolstering trade ties.

The UAE is currently India’s third-largest trading partner, with total trade recently touching $60 billion (Dh220 billion) last year, and annual growth topping 11 per cent. Hitherto dominated by gold, jewellery and mineral products, both scope and size are slated to rise on the back of the Indian government’s initiatives such as Make in India, Digital India and Smart Cities.

The UAE is also steadfast as the highest contributor to India’s remittance inflow; last year, this amounted to $17 billion out of a total inflow of $69 billion. The UAE is home to approximately 3.3 million Indians, the highest concentration in any single foreign country, and the remittance figures are also expected to grow.

Both governments look upon their strategic relationship as poised and primed to enter a more dynamic phase. By their expectations, bilateral trade will exceed $100 billion by 2020.

The long-standing buyer-seller energy relationship between India and the UAE is quickly transforming into a multifaceted, interdependent partnership.

Earlier this year, when Abu Dhabi National Oil Company (ADNOC) agreed to hire half of India’s 2.5 million-tonne underground strategic crude oil storage in Karnataka, this became its second such deal in the state. Indian Strategic Petroleum Reserves Limited has confirmed that ADNOC will store oil in two of the four compartments of its strategic petroleum reserves (SPRs) at Padur.

More Middle Eastern players are expected to express interest in storing oil in Indian SPRs, with long-term interests in mind. The move will also help strengthen India’s relations with producers who wish to supply oil to Asian consumers and establish a ground presence in the Indian market. Concurrently, Indian companies are buoyed by the prospects of bidding for additional concessions to develop Abu Dhabi’s oilfields, after a consortium led by the Oil and Natural Gas Corporation won the first in the Lower Zakum basin. With a daily production of 1.4 million barrels, this assures India 1.5 million tonnes of oil annually, for the next 40 years.

India, with its $2.8-trillion economy, is the world’s fastest-growing major economy, and has aims to move into the $5-trillion league by 2022. India also fares well on the World Bank’s East of Doing Business index, jumping ahead some 50 places over the past two years to score a rank of 77 in 2018.

The UAE’s public and private sectors have been nimble — and relentlessly unstinting — in creating or responding to investment opportunities that can benefit both countries. Last month’s launch of the India-UAE Bridge is a prime example.

A collaboration between DP World UAE Region, Jebel Ali Free Zone Authority (Jafza) and the Indian Business and Professional Council (IBPC), the major initiative aims to attract Indian companies and entrepreneurs to Dubai’s flagship Jebel Ali Port and Jafza. End-to-end solutions will support these new investors with value propositions such as the integration of DP World’s assets in both countries.

This ran concurrent to the UAE Government’s plans to invest $75 billion in infrastructure development across India. Both countries are now collaborating on emerging technologies such as blockchain and artificial intelligence to create mutual beneficial economic growth.

Meanwhile, Dubai Chamber opines there is a glut of bilateral business opportunities that remain unexplored, and its representative office in Mumbai is focused on finding and tapping into them. The 38,000 Indian firms registered with Dubai Chamber is proof of their preference, and they can expect solid support from the Indian Business and Professional Council (IBPC), which falls under the Chamber’s remit.

The IBPC is tasked with connecting UAE companies to their counterparts in India and assisting Indian companies that are keen to establish a presence in Dubai. The oldest association of Indian businesses and professionals in the UAE is now promoting new pastures.

It wasn’t the first time I’d traveled by myself, but a week before I flew, nerves flared. What if I spoke to no one for a week? Would people think it weird I was on my own? And would I be safe?

Where You Can Get Paid As A Social Media Influencer Online.

The Best Option For Getting Quality Positive Reviews For Your Business.

Buying Unique Photos Online From A Photos Gallery Through TOP.

Where You Can Find Ebooks To Read And Buy.

3 Reasons to Opt with TOP for Online Reputation Management Solutions.

4 Reasons TOP is The Best Option For Online Reputation Repair.

How Advertisers Can Get More Out Of A Site With TOP.

Ex-Cisco CEO says Facebook needs to ‘get ahead of regulators,’ faces a multiyear challenge.