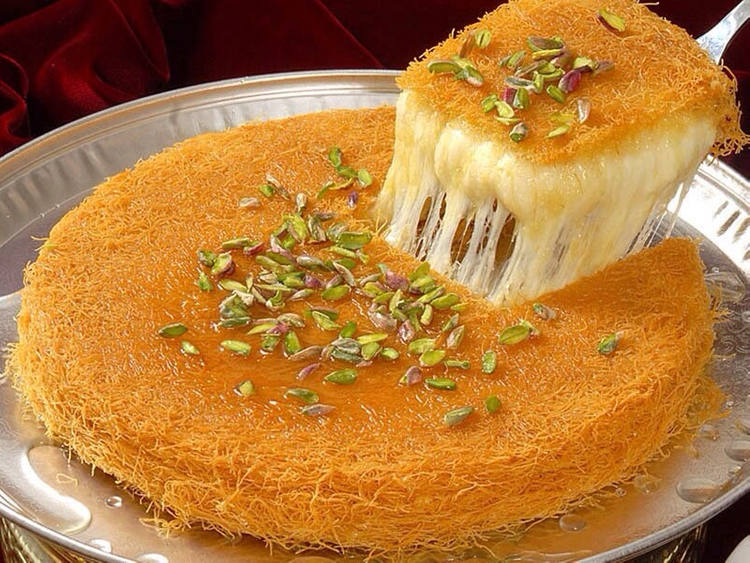 There’s nothing quite like a table full of Arabic desserts to properly end your iftar meal during Ramadan. And the most noteworthy Ramadan dessert of them all is the humble Kunafa. An oozy syrupy cheese pie covered in shredded phyllo dough.

The preparation of this incredible Middle Eastern dessert varies by region. In Egypt, they prefer a thick clotted cream base, known as ashta, while in Palestine, the base always tends to be a Nabulsieh cheese. Turkey is also famous for their kunafa, especially if the kunafa is consumed n Hatay, the city of ‘kunefe’.

Kunafa is always soaked in a sugar syrup flavoured with rose water or orange blossom water and then topped with ground nuts like pistachios or hazelnuts. It’s a dish that’s been around for centuries and has managed to maintain its popularity in different Arabic countries and is part of the rich and diverse cultures of the regions in which it is prepared.

“For me, kunafa is one of the best things about Turkey,” Mizgin Demir, a Turkish national living in Dubai, told Gulf News. “The syrup that they use in Turkish kunafa is so unique and different to the Arab kunafa. I have tried my fair share of this dessert from different Arab regions while living here in Dubai and I don’t like the Arabic kunafa the way I do the Turkish one.”

Turkish kunafa, or as they call it künefe, is always made with a cheese base. It is found in almost every Turkish city, “But it is most tasty in the Hatay, Gaziantep and Sanlıurfa provinces,” added Mizgin.

For the Turkish kunafa, they tend to use different types of cheese and in every case the dessert will have a different taste, but still familiar enough to entice the Turks to keep on ordering this dessert. “My favourite is the Turkish Kunafa with cheese and ice cream because it gives you that blend of sweet and savoury,” said Maisoon Mubarak, an Egyptian living in Abu Dhabi.

“In my opinion, the best kunafa is the one originally made in Nablus. It is made with a base of Nabulsieh cheese and topped with crunchy dough,” said Dina Saleh, a Dubai resident. “The original kunafa nabulsieh is also known as ‘Kunafa khishne’, which translates to coarse kunafa, this is because the shredded dough isn’t too finely shredded, and gets crispy in the oven. These days, the more popular kunafa, is the soft nabulsieh.” The dough is more finely shredded, so it has a softer top, but essentially the ingredients are the same. Kunafa Nabulsiyeh uses a white-brine cheese called Nabulsi cheese. It is spread out in a large round shallow dish and the pastry is coloured with orange food colouring and topped with sugar syrup and ground pistachio nuts.

Egyptian kunafa is lighter in colour and more diverse with the filling. One of the most traditional sights on the streets of old Cairo is a man pouring dough from a sieve onto a flat hot surface to make thin strips of Kunafa. “I love an Egyptian kunafa,” said Mona Helmy. “I prefer a base of cream, rather than cheese. In Egypt the kunafa is more crispy and much less gooey and oozy like the Levantine type,” she added. Egyptians can often have clotted cream, nuts or even fruit as the base of their kunafa. “Egyptian Kunafa with honey is my favourite,” said Nerveen Mohammed, a Dubai resident. “I adore the one with mango cream and my third choice would be the Turkish one with cheese and ice cream on top,” she added.

Lebanon is also widely known for its cheesy kunafa. Over there they typically use akkawi cheese and lightly flavour it with orange blossom water. They also take their kunafa a bit further by putting it between two slices of sesame bread. Local sweet shops in Beirut sell their cheesy kunafe as a ‘kaak’ in that fashion.

In Lebanon, they typically use semolina to make their kunafa, rather than the scratchy phylo dough pastry.

Some venues are pushing the envelope a bit with ‘fashionable’ kunafa flavours. Many spots will incorporate modern ingredients into their kunafa like Lotus sauce and Nutella spread. Some are even adding pistachio cream, rose cream, saffron and more. Egyptians have made mango kunafa so mainstream, that it is now actually considered a staple on the Ramadan dinner table.

Adding ice cream to kunafa is also considered a non-traditonal way of consuming it, but it is a popular dessert at some restaurants, especially when they want to be creative with the dish.

I have come accross Tiramisu Kunafa, Kunafa icecream, kunafa cupcakes and more. They become popular for one season, but then people want to just go back to the original recipe.

The origin of kunafa is still under debate. Some sources state that it comes from the Coptic Egyptian word kenephiten, which means cake. More sources point to Egypt as the place of creation. Kunafa was mentioned in old Egyptian storybooks like Alf Layla Wa Layla. Moreover, the Turkish term tel kadayifi i.e ‘string-pancake’ appears in 1501 in a Turkish-Persian dictionary.

Other reports claim that kunafa was first created for Muawiya Bin Abi Sufyan, a 10th Century Caliph of the Umayyad Empire in Damascus, Syria in order to eat during suhoor as a way to reduce hunger during the fast.

Where to get Kunafa in the UAE

The UAE is home to plenty of venues offering traditional and non-traditional kunafa spots. Whether you want your kunafa from Egypt, Turkey, Lebanon or Palestine… your options are plenty.

Here is your guide on where to get the best Arabic Sweets in town.

This very untraditional Kunafa shop offers a booklet sized menu full of different kunafas from all over the Arab world. Whether you want an Egyptian Kunafa or the proper Palestinian kunafa, you literally have a catalogue of options. I always choose the Nabulsieh Khishna, since I personally believe that is the best, but their menu also offers Nutella and lotus filled kunafa which could provide a different spin on things.

Al Baba Sweets is a delicious world of Lebanese desserts. They have a wide selection of baklava soaked in syrup, kunafa, halawet al jibn as well as handmade Tunisian sweets. If you’re looking for a box of something special to take away and gift someone, that’s the place to get your desserts from.

This shop is known for its delicious yet affordable Lebanese and Arabic sweets. They also have French cakes and pastries, coffee, juices and ice creams. You can pre-order and choose chocolate, kunafa, kahk and more.

Frequented by celebrities from all over the Middle East, this renowned authentic Arabic restaurant offers the classical cheese katayef filling with pistachio and pine. They have a wide variety of sweets like baklava, warbat, mamoul and hares that can be pre-ordered and decorated on a traditional plate. You can also request for extra stuffing in anything you order.

One of the things you should try if you live in the UAE, are the Arabic sweets at this famous dessert parlour. With multiple locations all over the country, Firas is well known for its kunafa. It’s warm, soft and really creamy with a generous amount of filling. They have different cream and cheese-based sweets for any occasion. Other semolina-based pastries they have on offer are ma’mul, katayef, warbat, halawet el jeben, mabroma, basbosa, ghraybeh, barazik, balah al sham, asabe’ zainab, and awama, among others. They have several locations in the UAE, but the one on 2 of December Street and the Al Barsha location are the ones we recommend.

Although Al Reef is mostly known for its amazing manakeesh, they have a pretty big selection of Arabic sweets including baklava, Kunafa, Maamoul and Kaak.

If you’re looking for somewhere conveniently located in a mall, then Wafi Gourmet is your go-to. They literally have all the Arabic sweets you can imagine. I once had Kunafa by the fountains and it was a glorious experience.