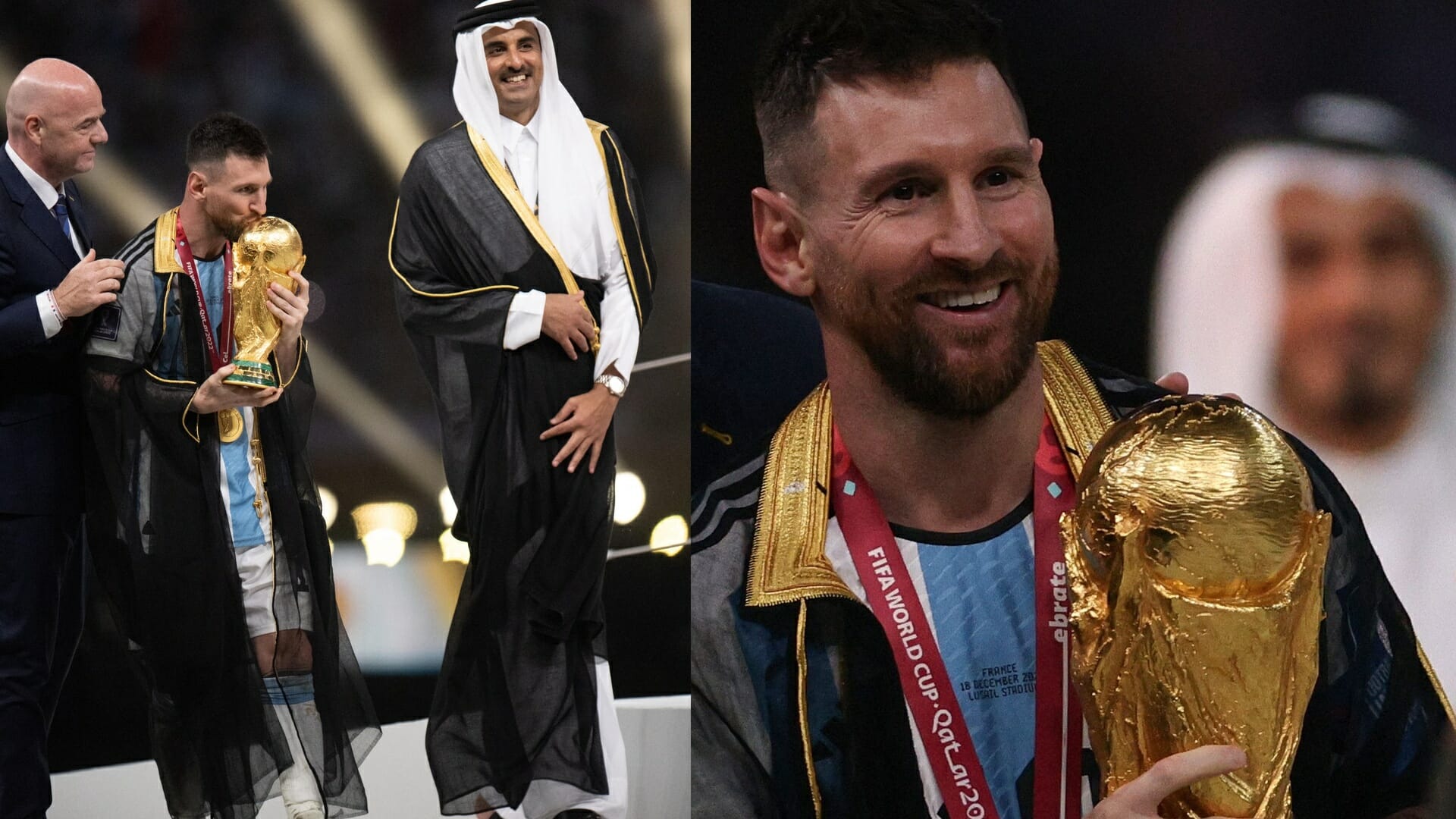 The newspaper described the matter as shameful and claimed that “Messi” was not enthusiastic about wearing the Arab Bisht.

The German press continued to attack Qatar, referring to Sheikh Tamim bin Hamad’s covering of Argentine national team star Lionel Messi as the #”Arab Bisht,” confirming its hateful racist attitudes toward everything Arab, especially its failure to organize an Arab country for the most significant global football event. Shameful!

“In a disgusting fashion.. The Emir of Qatar wears the Arab clothing of Messi, and experts oppose the measure,” According to the German newspaper “tagesspiegel,” FIFA President Gianni Infantino and Emir of Qatar Tamim bin Hamad surprised Argentine captain Lionel Messi with a black robe before he handed off the World Cup. stating that Messi appeared “unenthusiastic” when sporting it.

It also stated in its racist news that many people were surprised by Lionel Messi’s wearing of the black bisht during the presentation of the World Cup, adding, “And before the 35-year-old raised the golden cup in the air after winning the World Cup final in Qatar against France (4 -2 on penalties) On Sunday evening, “the Argentine was decorated with the so-called bisht.”

The Emir of Qatar, Tamim bin Hamad Al Thani, and FIFA President Gianni Infantino reportedly put on the customary attire for “Messi” at the last minute, despite the fact that “Messi seemed not enthusiastic about him,” according to the newspaper.

Bastian Schweinsteiger, a former racist German athlete, was cited in the newspaper as saying: “You take a major moment from the player. You may talk about it later in the locker room, but I didn’t like it either,” he continued, adding, “I don’t think Messi himself was either.” The procedure, in my perspective, was unsuccessful.

At the World Cup, Messi celebrates with his teammates while wearing a bisht.
Contrary to what the German tabloid said, Lionel Messi went to hoist the World Cup statue from the platform that had been set up on the grounds of Lusail Stadium after donning the Arab bisht. He did this as his teammates and the technical and administrative personnel were gathered around him.

What does “Messi” outfit in Arabic Bisht mean?
It stated that the bisht is a formal garment worn by members of the royal family, dignitaries, and brides on their wedding days, as well as graduates at their graduation ceremonies. Dr. Mustafa Baig, Lecturer of Islamic Studies at the University of Exeter, was reported as saying this. As a result, very few people will wear a bisht, he explained.

Paige continued, “It’s like a mark of honor, and it’s just a kind of cultural welcome and acceptance.” “And this is a magnificent occasion, in fact, there is probably no bigger occasion,” the wearer continues, “and it also reflects the Qatari national clothing, but only on important occasions.” So as a mark of respect, they placed it on his shoulders.

He added that he saw this as “Messi embracing the local culture,” and he called it “great” for Qatar and “smart thinking” on their part.