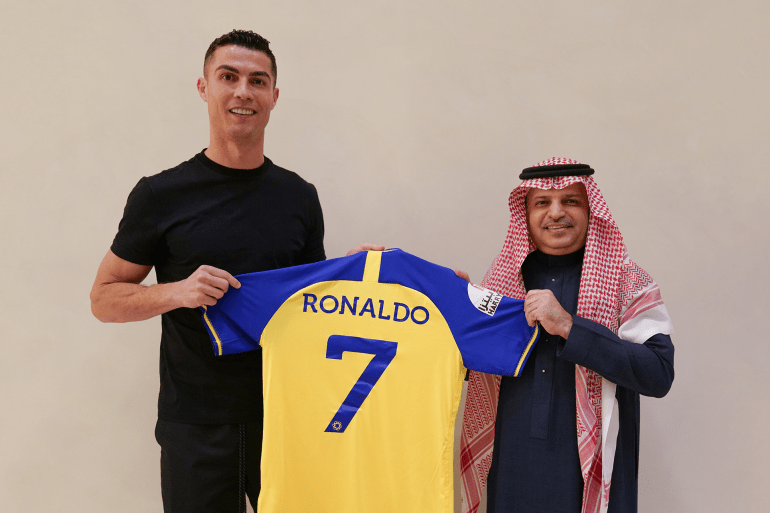 What will the Al-Nassr FC benefit from the Ronaldo deal.

Since the name of the Portuguese star, Cristiano Ronaldo, was associated with the Saudi club Al-Nasr, and the reports that preceded the official announcement, the wave of controversy and questions did not subside.

And after ending his contract with Manchester United in November, the Saudi club said two days ago that it has inked a contract with the Portuguese great, who has won the Golden Ball award five times, through 2025.

There has been a lot of speculation about Ronaldo’s salary, but everyone agrees that it is a fictional amount. If it weren’t for Ronaldo earning the greatest income in the world, 200 million euros per year (with sponsorship contracts and commercials), Ronaldo would not have agreed to it.

This enormous amount caused many users of social media to wonder what would drive a club to sign a deal with a player who is finishing the last few meters of the race for such an insane amount. Referring to Ronaldo’s age, who is 37. When fans realize that Ronaldo is too old to provide anything, they begin to speculate about the advantages that Al-Nasr Club will gain from this fictitious agreement.

Shirt sales
In a deal of 112 million euros, the Don transferred from Real Madrid to Italian Juventus in July 2018. According to claims in the Italian press, 520,000 shirts were sold on the player’s first day of play.

With the addition of 15 euros for writing Ronaldo’s name (or the name of any other player), the cost of the club’s lowest original shirt through the official Juventus store came to roughly 90 euros, making the total cost 105 euros. Furthermore, if we multiplied 105 euros by the 520,000 jerseys that were sold on the first day, we might infer that 54.6 million euros had already been deposited into Juventus’ bank account before Ronaldo landed in Turin.

According to statistics Ronaldo had the largest role in raising the club’s revenues from shirts to 170 million euros, especially in light of Increase the price of one shirt to 130 euros, the percentage of Juve shirts sold reached record numbers, reaching one million and 315 thousand shirts since Ronaldo’s arrival.

And once Ronaldo transferred from Juventus to Manchester United in England, his jersey sold 32.5 million euros in just 12 hours after it was posted on the team’s website.
Contracts for sponsorship and other benefits the issue is not dependent on the amount of shirts sold, but rather on how well the deal performs at the box office and how many people follow the team on social media.

According to data from the “Viccia Signora” index, Juventus saw a 68% gain in followers on social networking sites, and the number of its fans worldwide climbed from 385 million to 423 million, making it the ninth most popular team in the world.

Sponsorship and advertising earnings climbed by 22 million euros from 86.8 million to 108.8 million since Ronaldo’s arrival. At the time of the announcement of the contract with Ronaldo, the official Instagram account of the Saudi Al-Nasr club had already risen in popularity, with more than 1.5 million followers.

The league’s popularity and public appeal cannot be understated, nor can the desire of fans to watch a global superstar of Ronaldo’s stature from the stands. As a result, more people will attend games, whether as supporters of the winning team or those of the rival team, increasing ticket sales revenues.

Additionally, because Ronaldo is so well-liked, sponsorship firms will rush to sign deals with the international. Given that the Portuguese star’s supporters are dispersed throughout the world and the consequent surge in worldwide media interest, it is anticipated that this contract will contribute to the rise in popularity of Saudi football as a whole.

Financial returns for all clubs.
The financial returns will not be limited to Al-Nasr Club only, but it is expected that the Saudi Professional League Clubs Association will reap huge financial returns, from selling the rights to sponsor the competition and television broadcasts, whether inside or outside the Kingdom, and thus the material benefit will accrue to all clubs participating in the league.

According to reports, Ronaldo will also play a significant part in supporting Saudi Arabia’s quest to host the 2030 World Cup alongside Egypt and Greece.

Ronaldo’s accession may open the door to other big deals, as it has already been reported in the past hours that there are talks to include big stars such as Sergio Ramos, Luka Modric and Sergio Busquets for Saudi clubs, which increases the strength and competitiveness of the Saudi League competition and makes it the focus of the world’s attention.

The writer, Sultan Al-Zaidi says that football in Saudi Arabia seeks to spread, and there is great support for this approach from Crown Prince Muhammad bin Salman, and this is a legitimate right that must be pursued until we reach the desired goals, and try to disrupt these goals in any way. Forms will not serve the interest of Saudi football.”

Al-Zaidi added, “As long as the player’s name is associated with the Saudi League, specifically the Saudi Al-Nasr Club, this in itself is an important matter, and it serves the sports movement in Saudi Arabia.”